Graphic design of a chess game

This chess game is hard on the eyes. I think the transparency wasn’t really necessary. And the dominant visual element on the screen? This thing: 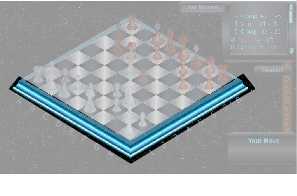 This thing doesn’t serve any purpose to the game, so why make it so prominent? Even the glare off the white squares of the board is higher contrast than the game pieces. Maybe, just maybe, the game pieces are more important than all this irrelevant decoration, and thus should be more visually prominent. I’ll just throw that idea out there.

They include shadows and reflections, which I guess is supposed to make it look more like a 3D object, but then mess up their perspective by about 40 percent: 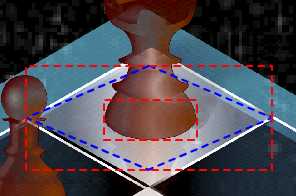 Not a huge beef for me, but it kind of reminds me of the aesthetic that often crops up on the Photoshop disasters blog. The best way I can describe it is as collage that’s trying to hide the fact that it’s collage. Stuff like this or this will show what I’m talking about. Lots of shadows and reflections, but somehow they betray their 2D nature.

Now, some nice looks can be had by playing loose with what is 2D or 3D, but this ends up looking more sloppy than deliberate, which is inviting criticism if you call your game “Chess 3D.”

And those bishops are just stupid: 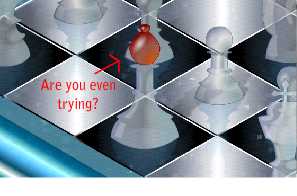 Added in 2012: Well it looks like they’ve updated the graphics and toned down the background by a lot. It’s still got something weird going on with those bishops, though.

This entry was posted in uncategorized and tagged games, graphic design. Bookmark the permalink.