Earlier, I discussed William and Sly and some rules changes between the first and second game.

I had trouble comparing the quest structure of the two games using only words, so I’ve drawn graphs of the two: 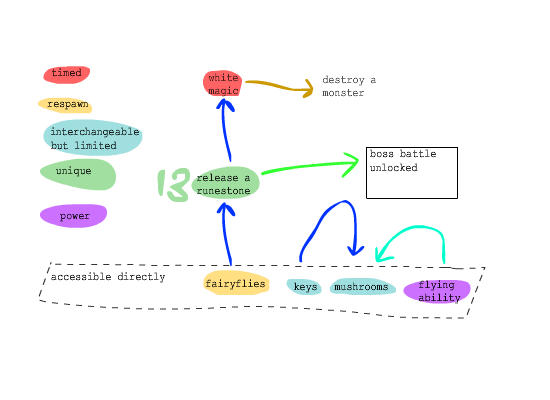 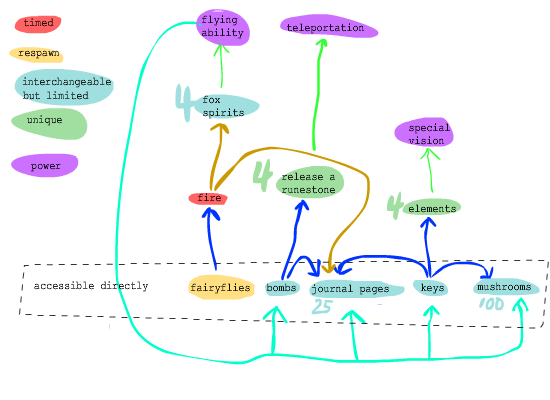 It’s similar in concept to “skill trees” or “crafting graphs.” For each thing you can get in the game, I’ve identified which can be found directly, and which have prerequisites.

I’m not sure yet how to identify subsets of items. For example most mushrooms can be found directly, but a subset of the mushrooms are inside locked chests, which need a key as a prerequisite. Also, I didn’t treat stationary objects as items for this list. In one sense, getting a mushroom from a chest has two prerequisites, the key and the chest, not just the key. But I left out the chest to keep it simpler. You can think of the “conversion method” for the key as bringing the key to the right location.

For the prerequisite arrows, I tried to colour code them because I think there’s value in the diversity of how you use them. (I may also think of these as converting one or more items into another item. This article on Free to Play games analyzed some of them according to “currencies” and how they can be converted. Also the same author wrote about The Sims Social with the same ideas.)

So variation is one metric you can get from the graph. The other is depth, which is how many conversion steps can you go from a base-level item? The base-level items, like Fairyflies, have no prerequisites to acquiring them, so they are base-level. Since fire can only be acquired by converting Fairyflies into fire, fire has a depth of one. Anything locked inside ice requires fire, so those items have a depth of two. Deeper items feel more valuable to the player. Some items were in places only accessible once you have the power to fly. To get flying, you release four fox spirits, which requires fire. So flying is three steps from a base-level item, and things that require flying are four steps away. There were even two journal pages in ice in locations only accessible by flying, so that requires you have both fire and flying. Would you consider that as having 5 pre-requisites, or would you just count it as the deeper of the two? The first game had as its deepest item destroying a monster, which is only three deep from fairyflies and didn’t have as much diversity in the methods required. (You had to unlock 13 runestones.)

In the examples of social games using “currencies” they can feel like a shallow game even when they have many different currencies if the method of converting currencies doesn’t have much diversity. So is diversity more important than depth?

This entry was posted in uncategorized and tagged analysis, game design, video games. Bookmark the permalink.