Someone made a side-comment about platformers, how it was based entirely around timing and therefor the lowest common denominator in games, and that’s the only reason they are so popular. (Of course, this was in the context of explaining why their favourite genre is superior.) I thought this was unfair but I wanted to think more about why.

The first obvious point is it’s not just timing, it’s timing plus position, at the very least. If you strip everything from a game except timing, you won’t get a platformer, you’ll get a rhythm game, like DDR or Parappa. Not that I think those are the LCD in games, but that’s a topic for another day.

But why is platforming so popular? Is it just the influence of Super Mario?

After considering it, I decided platforming is a way to add interesting complexity to the movement of a game that is also intuitive.

There’s one idea in game design called orthogonal unit differentiation. Also explained nicely in this video in relation to Doom’s enemies, which was probably cribbing from this longer explanation here.

The short version is that if you’re going to offer variation, it’s a way to consider if it’s meaningful variation.

For example, if you had a shooting game with five choices of gun, and they were identical except for the amount of damage they cause, that wouldn’t be very interesting variation. You’ve differentiated them all in the same way. You might call that parallel differentiation rather than orthogonal. On the other hand, if you have a weapon that is powerful but slow and one that is faster but weaker, then the player can make a meaningful choice about which is better. (And one could be better in different circumstances.)

So, back to platforming?

OUD is usually brought up in relation to objects in the game. In the Doom example, it’s the monsters you are fighting. I gave an example with guns. The Harvey Smith presentation uses an example of army units from a military strategy game. So I may be stretching the meaning of it, but platform mechanics provide orthogonal differentiation between up, down, and sideways movement.

Now, in a literal sense, vertical movement is orthogonal to horizontal movement. That’s the original mathematical meaning of the word, after all. But for example, in Pac Man, if you took the maze and turned it on its side, you’d still have essentially the same game. Because movement in all four directions works the same.

If you took Mario Brothers and turned it on its side, you’d completely change everything. (And it probably wouldn’t be a very good game anymore.) 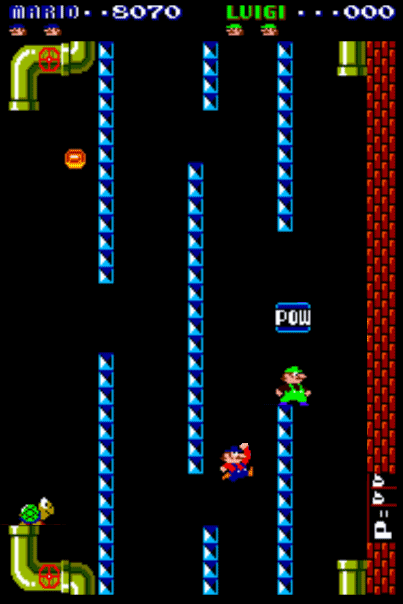 Moving from the bottom to the top of this screen is a completely different action than moving from the top to the bottom. Or from the left to the right. All thanks to gravity and jumping.

Imagine trying to explain this movement without any reference to “jumping” or “gravity.”

As a movement mechanic, it’s surprisingly complex, and I think only manages to stay intuitive because it piggybacks on concepts that people are very familiar with.

This entry was posted in uncategorized and tagged game design, video games. Bookmark the permalink.